It’s been a while since I uploaded my last thoughts; well to update you all on my progress I CHOSE FINE ART!! Like you didn’t see that coming 😛 Anyway, I have enjoyed myself in the fine art pathway, progress was a bit slow to begin with; then I started working which slowed me down even more -_- but now it’s the holidays and I’m starting to get used to my new schedule, GROWING UP SUCKS!!

Our project to kick-start the pathway was Deconstruction Reconstruction and looking at my work previously I noted that I was very keen on portraiture. however I didn’t want to, straight away, paint figures. I wanted to explore different ways of portraying a portrait; I decided to look at myself to begin with, not because of vanity but as a starter to make me think of ways of representing ME. I thought I was going to take an abstract way of looking at things but a discussion with a lecturer made me realise that my art was more of a representation of something rather than an abstract view. With this correction my work took on a whole new twist; looking at Alison Watt’s ‘Phantom’ oil paint series I began to look at fabric again. Alison Watt’s work is described to be many things, but I like to interpret it as portraiture, there’s no doubt that her fabric paintings have a human presence, due to the nature of the distorted fabric shapes within the painting. I then began to look at Christian Boltanski’s work who, in a way, works similarly to Alison Watt. He makes installations, often of objects that have had a past or photographs; displayed in such a way to provoke an emotional (often empathetic) response to the veiwer.
I want my work to reflect both these responses with the use of other references I may get from artists later on; however for now I simply looked at the element of fabric, the following pictures below are the experiments I started with to kick-start this project. 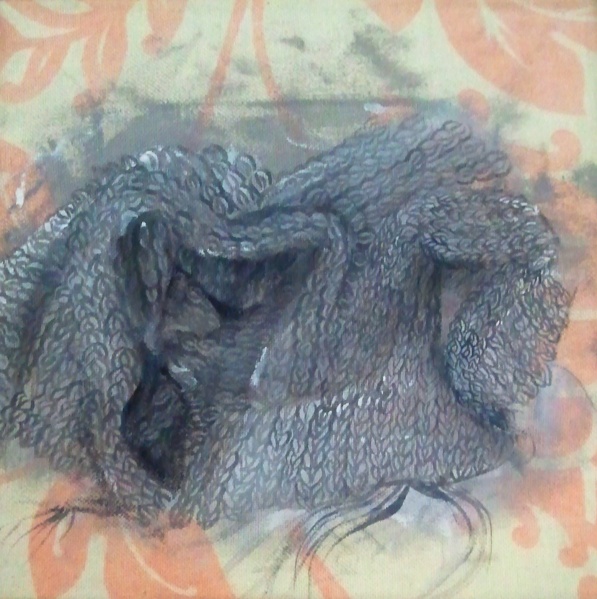