So Simone, Ryan (and his girlfriend) and I went to the lighting event held at the Natural History Museum; it was AWESOME but Simone had essays to write so we left early. Whilst on the bus, a couple and their little girl came on and Simone and the kid had a convo. So Simone asks “what do you for Christmas?” the girl replies ” a Dinosaur!” To conclude the future looks bright for the next generation (for Oxford anyway :P). The Natural History has this massive T-Rex by the entrance – which I’ll have next to my grand staircase but Simone is convinced she’s going to have one too but I’ll have it first MWAHAHA >:) – that coupled with the convo between the girl and Simone; it was obvious that I had to do something with Dinosaurs! Alice (good friend and block mate) has a brother  that does origami and had a book on Dinosaurs! SEE FAITH!!!!!! you can guess what happened next… I spent 30 minutes trying to figure out the cryptic folds of the book’s illustrations -_- BUT I DID IT (with a few alterations :P) and for some reason I did it with purple paper; a subliminal message from my past. And I never realised, until now, just how camp Barney was! 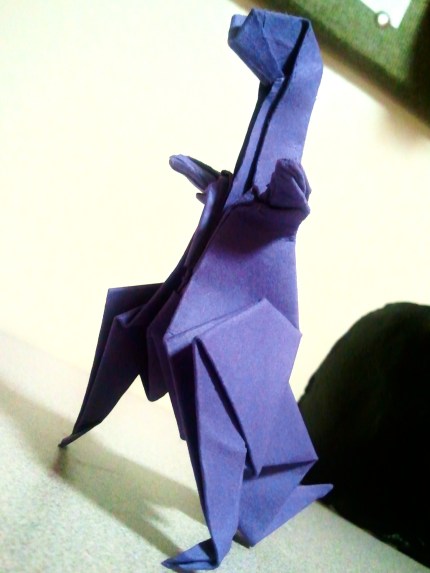