So as it’s slowly being revealed to you all I do like to make stuff, now I don’t consider myself fashionable but as cliche as it sounds I have a passion for fashion. (you can’t hear me but I’m laughing my shame away just at the thought of writing that) Anywho I’m getting ready for summer but the geist informed me round Christmas time that it was time for dungarees; to mask my shame I never told anyone that I bought a pair until now of course because the excitement for summer has taken over. These were a pair I bought on ebay from jellybellyvintageleeds. They were full length but I wasn’t a fan of the bagginess, So I committed murder and chopped up the bottom half and tailored it to a perfect fit. This was in January. The frustration from cutting, sewing, pricking and bleeding several times made me take a well deserved break from the nonsense. But it gave me time to think of what else I could do with it. So I took a trip down memory lane and remembered that during my trip back to Zambia I bought various fabrics back with me to see what I could do with them. And as if I was getting pimp-slapped, the idea came and inspiration with obsession and determination and the zeal to defeat my dungaree grief, took over and I finished my mini project. Always wanted a pair of dungarees as a kid and now I HAVE THEM >:`D  (scar for extra added evil) ah I’m so 90s. 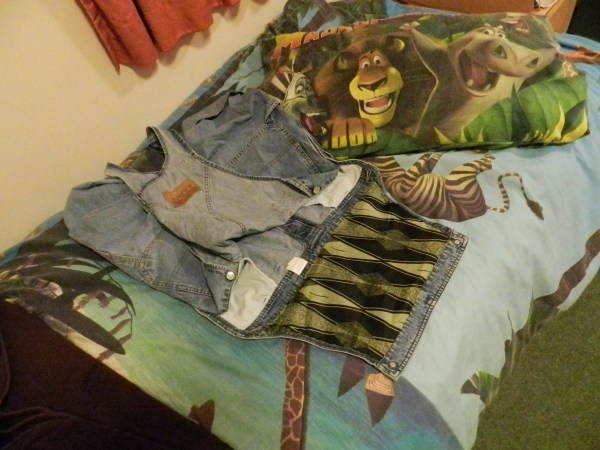 Posted on February 10, 2013 Posted in Animals, Miscellaneous, PeopleTagged 90s, African, Art, Dungarees, Fashion, I Like to Move it Move it, Material